Wednesday, September 04, 2019
A message across the ages The first organized (pre-electric) telegraph network was the 1793 Chappe system. Short synopsis: The inventor, Claude Chappe, was a tragic figure, the classic introvert who let perfectionism kill him. Like most successful inventors, he had business-minded brothers who could carry the business side of the project. Claude's first attempt was a clock-style telegraph. Each station had a synchronized continually rotating letter dial. The upper panel was white on one side and black on the other, and pivoted vertically. The sending station would give the panel a quick turn, switching the color, when the desired letter was on the clock; the receiver would see the flash and record the corresponding letter from his own clock. 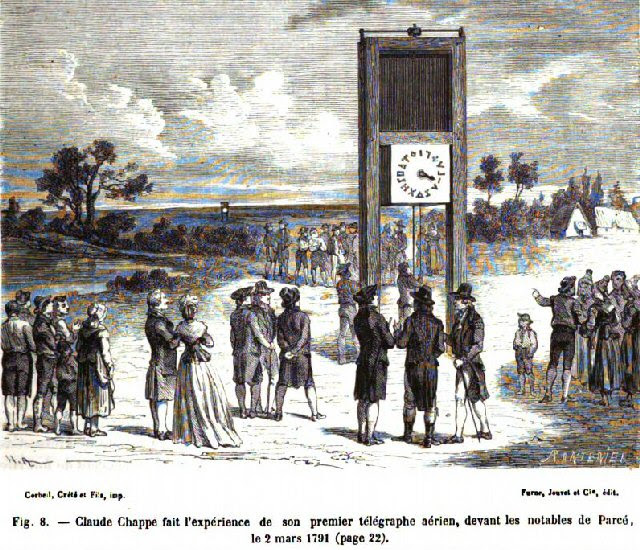 Revolutionary mobs disapproved of this invention and burned it. 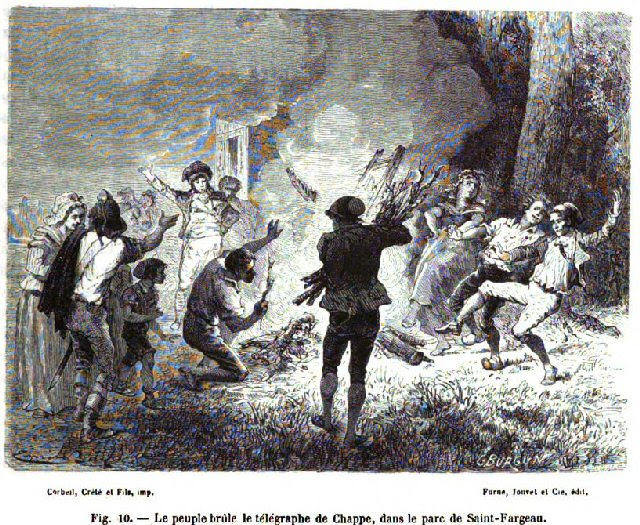 The family managed to get the attention of the ideologues, who saw the value of a nationwide system to carry military commands and propaganda. Claude's second invention was built quickly, with Chappe mechanisms mounted on every tall building and every available hill. After the revolution was replaced by the usual neocons, Napoleon expanded the network even more for military purposes. From a beautifully written account at Parisian Fields blog:

But it seemed that the more his idea spread, the more Claude Chappe was beset by rivals, claiming they had had the idea first, or that they had a better idea, or that the clockmaker Bréguet was the real genius behind the invention. In 1805, suffering from depression, he committed suicide by throwing himself into a well at the main Telegraph Administration.

Perfectionism leads to the predictable all-or-nothing tragedy. The business-minded brothers continued running the system until 1845, when it was replaced by a direct electrical metaphor in order to retain the SKILLS and continue the employment of the operators. Claude missed the chance to participate in the long success. But maybe it's a good thing that he missed the later development. From Parisian Fields again:

Around that time, twin brothers in Bordeaux, François and Louis Blanc, came up with a plan to bribe telegraph operators between Paris and Bordeaux to introduce “typos” (the French use the delightful word coquilles) into messages sent across the system; the coquilles indicated the direction of the Paris stock market each day. This allowed the brothers to beat the Bordeaux market in government bonds. They were eventually caught, and even tried, but since they had not broken an existing law (laws generally lag behind new technology), they were not punished.

More on the Blanc Brothers from an oddly translated Wikipedia article:

They grew up in a small town and were impressed every time circus came with a show - it seemed so interesting and simple so they followed the circus to learn all the tricks of the trade, boys were dreaming to become rich and successful and learnt so much and worked on different jobs. The brothers started to work in gambling business in Marseilles and earning some money brothers decided to develop their business and started to speculate on government pensions and got into real estate development. In that way they attracted attention to their business and were arrested, but not for a long time because law was not adopted yet for such cases. They were released and moved to Paris, but after King Louis Philippe passed new laws they had to move again - to Luxembourgh. They ran profitable business there but it was just the first little step to their success in Hesse-Homburg near Frankfurt, where brothers signed a contract with a monarch because of debts of the city and in order to develop tourism industry. It happened that the Prince of Monaco had recently legalized gambling, so "The Magician of Homburg" became that first person to establish a casino operation in Monaco.

Government contracts + casinos = absolute corruption + absolute impunity. Text communication systems always make it easier for Satan's stocksters to steal from honest businesses and governments. True from Chappe to Morse to Compuserve to Twitter. = = = = = I've "built" a model of the Chappe system, using the Chappe code. The model is sending a Carverian message from an introvert who has (more or less) conquered perfectionism to the ghost of Chappe, and to other introverts who tragically allow perfection to delete future joy.

A closeup look at the controls. Existing pictures are vague, so I designed a setup that would work if implemented. The pictures show ropes between the pulleys, but chains would have been better.

This system required considerable skill and brute strength. The stationnaires were expected to work 12/7/365 for 38 francs a month, roughly $150 now. They had to watch up and down the line for messages from other telegraphs, and then twist their wrists and bodies to resend the message. No wonder they were easy to bribe. By contrast, the early dial telegraphs required no skill and no strength, and Morse requires considerable skill and no strength. = = = = = Here's a somewhat speculative model of the original clock-style. Happystar demonstrates the operation of the pivoted planche, which would be visible for about a mile in ideal conditions. This device would be especially suitable for night use. A single fixed torch could illuminate the planche; if the bright side was reflective metal, the signal could be visible for many miles.

The clock-style would require two people to operate properly. Polistra would be reading the text and watching the clock. When the next letter was about to hit, she would give a vocal command to Happystar. No skill, some strength. = = = = = The Poser set will be released when I finish the House-Brett printing telegraph, another no skill no strength system that didn't get very far. Raises an interesting question: Successful systems required either physical strength or mental skill. Telegraphs that anyone could operate didn't succeed. = = = = = Stupid footnote: I initially assuméd that the namé had to be Chappé. Like most Americans, I automatically think that Frenchay worday alway enday with é. Laysay lay bon ton roulaaaay! The name just doesn't look right as Chappe, but in fact it is Chappe. One syllable. = = = = = Not quite stupid footnote: It's odd that Chappe's code didn't include separate characters for the various diacritics. A business or military message could be ambiguous without them. He used the Latin tradition of i=j, but included k and w as separate letters. Both are odd choices for French, where i and j are fully distinct while k and w are foreign and rare. See the 'lesser Russian alphabet' for another odd set of choices. /// LATER: He did include the diacritics and a few digraphs. I was using an improper account of his code.