Friday, April 19, 2019
Regeneration 3, reprinted This year is the 50th anniversary of my jail year. 4/19 is one of the 'mark' days. 4/19/69 was the day I entered county jail. I had intended to write about the experience, but it seems more appropriate to write contrary to the experience. Mentioning the little regen receiver led me to reread the sequence I wrote three years ago. Regeneration 1 Regeneration 2 Regeneration 3 Regeneration 4 Regeneration 5 Regeneration 6 The third item in the sequence is the most appropriate contramemoration of this day. It was the first time I pulled together all the pieces of Makeforce in a coherent way, and it ended with a specific mention of jails. = = = = = START REPRINT: Part 3 of a series, following from 1 and 2. Why am I focusing so heavily on analog gadgets with minimal automatic controls? It has to do with defensible spaces. Benedict spaces, if you will. In any important technology you can trace a path of gradual automation. At each step the machine does more for you, which is GOOD for most people UP TO A POINT. But each step away from strictly manual ALSO removes one interaction between your INTELLIGENCE and the machine. It removes mental exercise and muscle memory. It atrophies your PURPOSE. When you're accustomed to operating at one level in the manual-to-auto scale, you don't know what you're missing. I'd been using superhet radios for 60 years and appreciated the one-knob convenience. I suspected that I might be missing something by not experiencing regen, which is why the bucketlist. Now that I've built and used the regen, I have a better feel for what I was missing, and it turns out to be meaningful. We can run similar sequences on many common technologies. Note that I'm not listing all developments that make the tech more powerful or more convenient; I'm strictly listing the progression from manual to auto control. Only the developments that remove a parameter from YOUR direct supervision. In radio: Crystal, TRF, Regenerative, Superhet, DSP, DSP under Cloud control. In heating systems: Automatic damper, Bimetal thermostat, Software-controlled thermostat, Nest stat under Cloud control. In cars: Vacuum spark advance, Bimetal choke, Synchromesh, Hydramatic, Cruise control, EFI, Software that controls everything, Self-driving software under Cloud control. Hmm. We seem to have a point of convergence here. All roads lead to Tim Cook. Or Jeff Bezos or Eric Schmidt or Elon Musk. Pick your devil. They compete with each other in some ways, but they all want the same thing. INFINITE POWER OVER MORE THAN EVERYTHING. They all want your soul. = = = = = Resistance is futile, but self-defense is not futile. First and most directly, don't merge with the Cloud. Don't take that last step, don't place your devices into Elon's hands. More subtly, use Makeforce to maintain your borders and keep the soul-suckers at bay. Makeforce is imperceptible but real. It sounds like an old idea: Idle hands, devil's workshop. The old sayings don't hit the mark. Makeforce is not mere activity. It's creative activity. When you are turning raw materials into a human product, you are turning chaos into order. You are pushing outward against the chaotizers. You are generating a counterforce that deflects the propaganda away from your own mind. When you are cooking from scratch, or knitting a sweater, or installing a manual can opener, or building a radio, or planting a garden, or (most of all!) birthing and raising a kid ... You are exerting Makeforce. You are protecting your own soul and adding to the stock of non-Cloud substance in the world. At least in my experience, abstract Making doesn't have the same effect. I spent all of 2014 working hard on courseware. The simpler 'idle hands' concept applied; while I was deeply absorbed in wrestling with SVG, HTML5, and JS, I wasn't listening to the incoming propaganda ... but I didn't feel the sense of active protection that I get from physical creation. Perhaps this was because the product itself was meant for Cloud-like usage; more likely the simple lack of physicality. The work didn't yield food to eat or sweaters to wear or radios to enjoy. As it turns out, I won't even have MONEY from the product, because the publisher has decided to abandon the whole subject area as part of its JPMorgan LBO requirements. I didn't know that while I was working, but it fits the patterns and purposes of the infinitely evil Tribe. Total abstraction. Pure LBO, pure debt, pure counterfeit, pure derivatives, pure numbers. Sucking out the soul of America and giving nothing back. = = = = = Think about the progression of the chaotizers. Along with automating mechanisms, they are explicitly shutting down all possible sources of Makeforce. 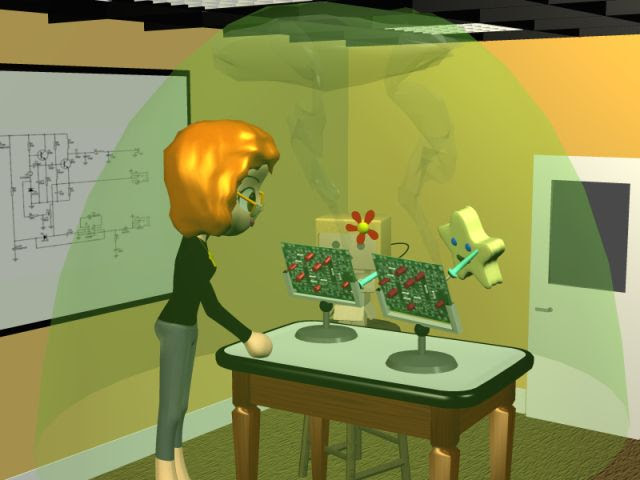 They began with environmental tyranny. Making things always produces smoke or steam or waste. The Makeforce of fire and smoke was appreciated thousands of years ago, as witness its use in medical and religious ceremonies. Prohibiting smoke instantly kills lots of making, and also kills the sacred power of smoke. Then the tyrants directly killed industries that had allowed ordinary men to generate Makeforce and support productive families. Men are no longer permitted to make, so they break. Gang warfare, more recently disguised as "religious" warfare. In parallel, the tyrants have made it nearly impossible to birth and raise a productive family. Abortion is easier and cheaper than birth, mothers are forced to work because the fathers can't, and day-care is less risky than discipline. Now the tyrants are even killing our ability to store order in the form of savings accounts and dams. All dams must be breached, all savings must be confiscated. At the scale of cultures and nations, we can't generate order from chaos, we can't exchange order for money, and we can't even store order to survive a time of chaos. All exits blocked. We can still create order within our own little spheres, and Nature tells us this is good. = = = = = Sidenote: Makeforce is also effective against internal demons. Formerly prisons and insane asylums understood this vector diagram and used it to great effect. Around 1970 the worst of all tyrants, the "human" "rights" advocates, killed Makeforce in prisons and asylums. Prisons have finally started to claw back some of their lost territory, which is the only bright spot in this whole dismal picture. Asylums are stuck in the "human" "rights" hell. No gardening, no farming, no sewing. Just drugs and TV, guaranteed to reinforce and expand internal demons. = = = = = END REPRINT: