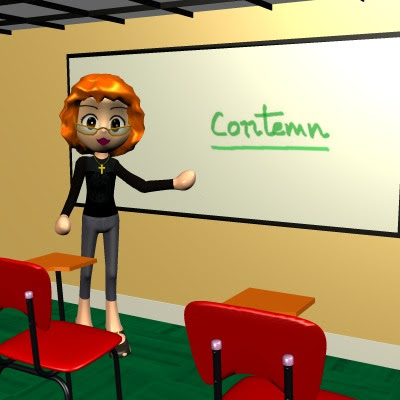 Professor Polistra still hasn't gathered enough new and annoying phrases and words for a blackboard, but decided to pop in anyway to show off a newly acquired specimen, a rare antique.

Contemn is the verb form of contempt, but contemn is never used in speech for obvious reasons. Too close to condemn in both sound and meaning. Only a seriously talented speaker could use it without confusion.

Prof P has been waiting many years for just one specimen of contemn, and finally caught one!

Incidentally, the computer-like humans and human-like computers who win Jeopardy would have failed badly on Info Please. Though it started as a fast-paced quiz with lots of straight "name this" questions, Mr Fadiman quickly reshaped it into a smooth-flowing stream of civilized discourse. The listeners, who submitted all questions, picked up the change and raised the bar of sophistication. Mr Fadiman later said: "I tried to use the questions and answers as an armature on which to build a sculpture of genuine conversation."