Friday, September 24, 2010
Why did Stalin turn against us? Polistra has been wondering why Stalin put so much effort into subverting the US after WW2. 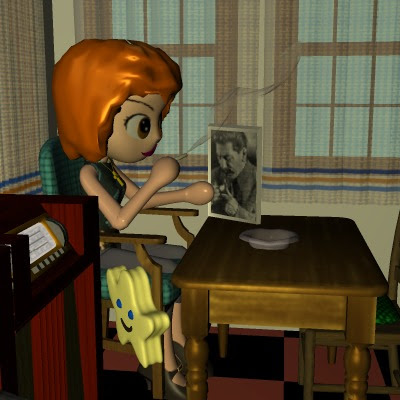 From our side it didn't make sense; we had been working in partnership with Russia in the war, and our people had tremendous sympathy for the Russian people who had borne the brunt of defeating Hitler. (One of five Russians died, one of five Russian towns was destroyed.) The Marshall Plan could have helped Russia recover, but Stalin chose instead to make us an enemy.

Surely old Joe didn't expect to fully Sovietize America in his lifetime. He also remembered from 1920's experience that a big socialist economy can't stay alive unless some big capitalist economies remain in other countries, to provide surplus food in emergencies and fancy goodies for the nomenklatura. Unlike today's idiotic American commie rulers, Joe didn't believe his own propaganda. Given all those certainties, what the hell was he trying to do?

A newly available radio series offers a possible answer. War Telescope, now available at OtrCat.com, was a series of 15-minute programs on NBC, aired weekly through the war years, hosted by Elmer Peterson and Morgan Beatty. All of the segments provide a mix of insight into wartime life and speculation about the coming peace. Many of these insights have been lost in current thinking.

"A European View of the War", aired 2/26/44, may contain the answer to the Stalin puzzle. It focuses on the diplomatic community in Europe, who considered America to be an unstable and unreliable ally. [Robert Parker's 1944 book echoes these concerns.] Our military had saved Europe's ass in WW1 and WW2, but before and between the wars our government had failed to form an intelligent and coherent foreign policy. Would we hold steady after this war, helping the other Allies to conclusively and decisively punish Germany? Or would our financiers and industrialists fall back to their natural preference for Germany, carrying Congress with them as they had done in the 1930s?

From this angle it's easy to see why Stalin wanted to have a firm hand on American policy, wanted to insure that the United Nations Organization served Russia more than America. From this angle, letting America return to normal meant letting Germany return to power. It wasn't mainly about Communism; it was mainly about Russian and European national interest.  ¶ 5:45 AM