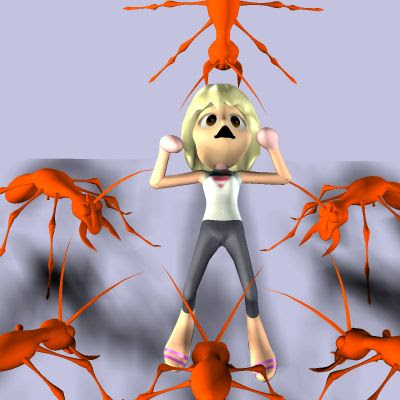 This year, because of various distractions, I was late in ordering the annual supply of ant poison. Hoped I'd get by, but no such luck.

An hour ago, absorbed in work, I heard an odd sound ... a mixture of rushing and crackling. My first thought was Fire, so I snapped to attention and looked around.

THOUSANDS OF FUCKING ANTS, a satanic blanket of ants, were crawling and flying across the living room rug, toward the door.

Luckily I was able to spot the source of the invasion: a slot in the floor near the water heater; and luckily they were already marching toward the sunlight. So I blocked the front screen door open, which allowed the vast majority of the fuckers to march and fly directly out of the house; and I was able to vacuum up the stragglers that moved off in other directions. The hatchout stopped as abruptly as it had started, after 20 minutes of hell.

After I insured the invasion was finished, I took the vacuum bag out to the trash.

At that moment the UPS man brought the box containing the poison.

Silver lining, if it's possible to use such a term: After handling several thousand of the fuckers with competence and success, I don't have such a strong phobic response to one fucker.

Silver lining #2: My frantic take-no-prisoners Roosevelt-style vacuuming cleaned some nooks and crannies that I rarely reach with my usual Bush/Wilson vacuuming!  ¶ 3:50 PM