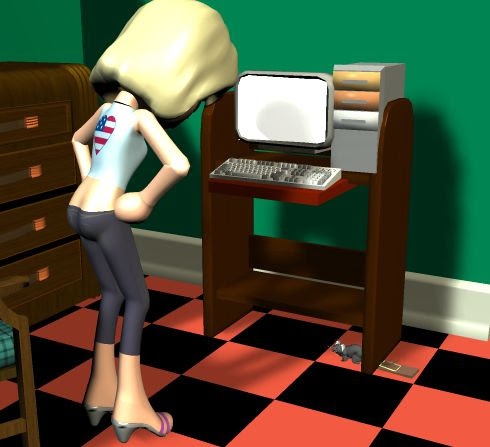 Every autumn when the first frost comes, I have to deal with a few mice in the house. So I set out Victor traps in effective locations.

When the trap kills instantly, no problem. Just pick up the trap by the wooden part, and take it out to the trash.

When it doesn't kill instantly, it's more difficult....

This morning I woke to find an odd combination of dust scattered around the kitchen floor.

After puzzling it out, I realized a mouse must have been dragging a trap around. I explored the house on tiptoe, and soon located the problem by hearing the noises. The mouse had ended up under my computer desk, with its leg in the trap.

Well, at this point I had several choices.

I could behave like a Bush: ask the UN to write me a resolution, then ask Jimmy Carter to arrange an election among the other mice to determine what should be done.

I could behave like a Republican Congressman: bring in the media, focus their cameras on the poor little mousie, and blame the opposition for creating this horrible situation.

Or I could behave like a relatively mature and sensible human: Eliminate the mouse in order to have a livable house.

I took the third path. Closed my senses to the pleading eyes and plaintive squeaks, grabbed the trap with pliers, dragged the mouse backwards under the side of the desk, and took it out to the trash barrel.

Not as much fun as the other options, but it has one minor advantage: it preserves my little corner of civilization.  ¶ 12:49 PM